Founded in 1886 by Filadelfo Simi

In 1886 Filadelfo Simi founded the international art school “Studio Simi”.
The studio was situated in Via Tripoli 1 in Florence.
Filadelfo Simi graduated at the Accademia in Florence in 1873 and then he went to Paris, to perfect his skills at the studio of the famous artist Jean Léon Gérôme until 1878.

After Filadelfo died in 1923, Nerina Simi succeeded her father as the teacher in the international art school “Studio Simi”

The existence of the studio ended at the death of Nerina Simi in 1987. So Studio Simi existed for 101 years. Many people from all over the world studied with Filadelfo Simi and with Nerina Simi. The studio was run by only two people, Filadelfo and Nerina Simi.
Filadelfo for 37 years and Nerina for 64 years.

Studio Simi the only atelier-school

In 1976 Nerina Simi’s atelier school was the only place in Florence and probably in the whole of Italy, where skill based drawing and painting was taught. She was a direct connection with the art that was customarily taught in the 19th century. Nerina Simi gave her life to teaching, her greatest virtue was her infinite constancy. 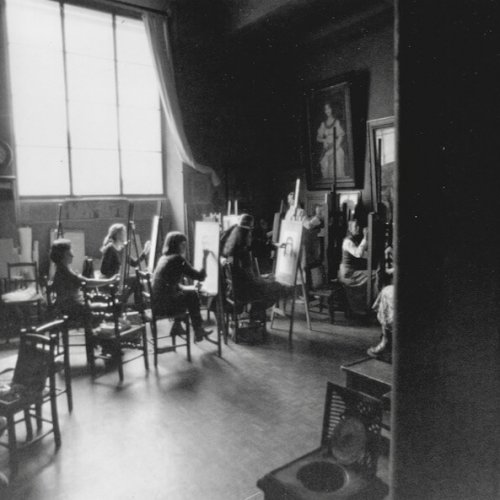 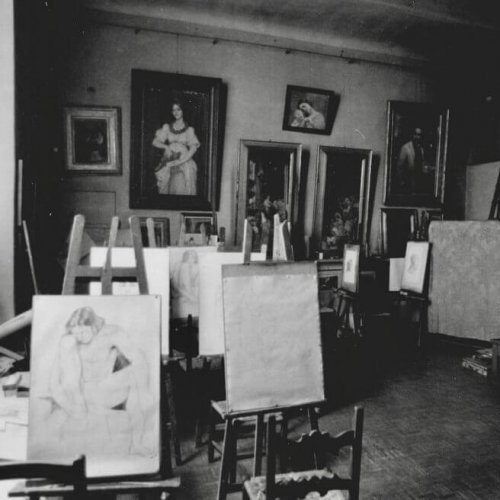 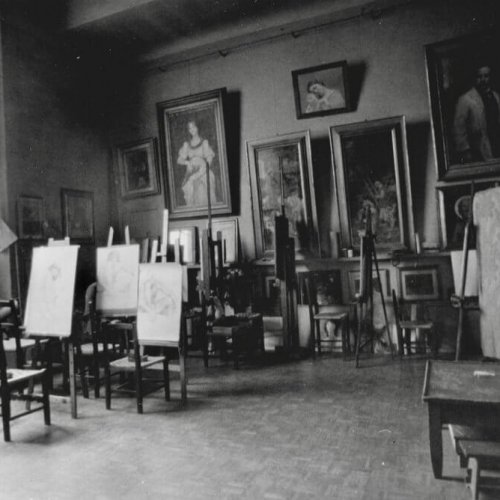 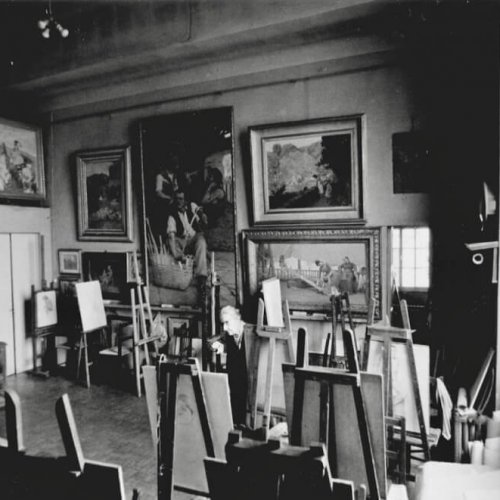 Filadelfo Simi was born in Levigliani in 1849. Levigliani is in a mountain area in Versilia Alta where marble is mined. He was demonstrating early skills for drawing, so he was sent to the Art school of Seravezza a nearby provincial town.

In 1869 Filadelfo was sent to study in Florence, at the Accademia, where he graduated in 1873 . During his studies in Florence, Filadelfo met an influential politician, Angiolo Vegni. This man made sure that he could go to Paris, to perfect his skills at the studio of the famous academic artist Jean Léon Gérôme. In 1878, his final year in Paris, Filadelfo exhibited “Forest of Fontainebleau” at the “Exposition Artistique” of the Paris Salon. Filadelfo settled in Florence and he held his first solo exhibition with 26 works in 1882.

Filadelfo Simi was very successful in his lifetime, he was knighted, honoured and enjoyed recognition in society and the art world. In 1888 he became Professor of the Scuola del Nudo at the Accademia and in 1890 he was appointed President of the Painting Section of the Accademia di Belle Arti in Florence.He was not very prolific, he dedicated himself to a few paintings per year. In 1886 Filadelfo founded the international art school “Studio Simi” in via Tripoli in Florence.

In 1887 “Portraits of his Parents” were exhibited at the Venetian Exposizione Nazionale Artistica, they were awarded with a gold medal. They were shown in 1888 at the Munich Exhibition and in 1893 at Florentine Annual Exposition of Fine Arts won the  grand prize worth 5000 Lire. Filadelfo Simi’s work is in the Galleria d’Arte Moderna Palazzo Pitti a Florence and the Galleria Nazionale d’Arte Moderna a Roma.

After Filadelfo died in 1923, Nerina Simi succeeded her father as the teacher in the international art school “Studio Simi”.

Nerina Simi was born 13th of April 1890 in Florence. Her father was the famous painter Filadelfo Simi. She was baptised Nerina Maria. She signed her paintings Nera Simi. On his return trip from Paris, her father stayed for a short period in Umbria at Val Nerina. And this is where her name comes from: the river Nera and the Valnerina, valley of the river Nera.

Nerina enrolled at the Accademia in Florence in 1909. She was 19 then and she had been drawing and painting for many years already in her father’s International school “Studio Simi” in via Tripoli.

The year after Nerina graduated from her studies at the Accademia di Belle Arti, she obtained a position as a teacher at Montalve Institute “Alla Quiete”. This was an exclusive school for girls from wealthy Florentine families. (high school age). She remained in service until her retirement in 1964. When she retired from this school she was 74 and she had been teaching there for 50 years. At the same time Nerina Simi was continuing the international school at home on a daily basis.

Nerina Simi chose to remain unmarried in order to be able to dedicate her life entirely to art and teaching. In those days marrying meant the end of any personal ambition for a woman. We called her “The Signorina” as if it was a title of honour. Nerina Simi was an exceptional teacher encouraging her students to achieve far more than they could imagine. She dedicated her life to teaching and she was also a very accomplished painter.

Nera Simi died in Florence on February 4, 1987 and was buried with her parents in the cemetery of San Miniato in Florence.

Nerina Simi gave her life to teaching, her greatest virtue was her infinite constancy.

The Simi family had a summer studio and home in Stazzema, near where Filadelfo was born. Nerina  inherited the mountain studio home and she spent all her summers in this place in Stazzema. It is a little museum now.
artiststudiomuseum.org/studio-simi

Villanella next to Casa Giorgini

Filadelfo Simi owned another building in the mountains above Stazzema. It is called: “La Villanella” or “Casa del Pittore”. It is located at 800 meters above sea level and is close to the mountain and faces a splendid meadow view. Filadelfo Simi bought it in 1897 as a residence in the woods near his dear friend, Vittorio Giorgini. In addition, the house contains in the living room, three frescoed works, two by Filadelfo, and one by Nera Simi, in significant dimensions and fine workmanship. They can still be admired in spite of the damage caused in part by the passage of time and in part by vandalism. The Simi family stayed here during the summer months.

It been almost 40 years, 1977-79, that I was a young student at Signorina Nerina Simi’s Studio and yet the memories of Nerina Simi and the studio and the friendships are as fresh as they were when I was there. I was in Florence doing my graduate studies under a grant from the Smithsonian under the National Museum Act, receiving a Masters  degree in painting conservation from Villa Schifanoia in Fiesole. We at the conservation school were working on many of the paintings that had been damaged in the Firenze (Florence) flood of 1966 and which still needed conservation work years later. I had heard from many of the artists I knew in Firenze about Signorina Simi’s and how she was one of the few teachers still working in the academic tradition of drawing and painting following the French Academy techniques. I was told the celebrated painter Pietro Annigoni sent his students to her and also that it was very difficult to be accepted into her studio – because of the number of students and limited space. My weakest skill in the conservation work was not the chemistry nor science nor the art history, it was my drawing and painting skills – and so I put together a small portfolio of my artwork, and with much trepidation and my poor Italian speaking skills, decided to approach her – even though many of my artist friends tried to prepare me for an inevitable rejection!

So I rang her doorbell – having no appointment – and just coming off the street and was graciously shown into a small outer room. I could see a small elderly woman approaching – walking slowly -observing me carefully – with real acuity. At this time she was in her late 80s and I could see she must have been a real beauty when she was younger and yet still had a great presence on entering a room. She tried to set me at ease in our conversation with my broken Italian – and my numerous apologies. I tried to explain why it was so important for conservators to have drawing and painting skills. Why I was approaching her to become one of her students and why it was so really necessary. From her questions there was a sharpness of mind and a great kindness. She understood immediately, and she agreed! She said “conservators needed to learn to draw, there were so many who could not and did not understand painting.” I could not believe it  that I could come to her studio, that she was allowing me to come -that I was so privileged as one who was not an artist – as I said a great sympathy.

I explained that I could not attend every day because of the university classes and she asked me to come the next day – which I did and I was placed into the small room – the cast room – the still life room (the photos you see above) with paintings hanging on the wall from floor to ceiling – by her and her father Filadelfo Simi (1849-1923, part of the Italian Macchiaioli artists) – with north light pouring from a window over the still-life table and the plaster casts in the background.

Many of Signorina Simi’s students do not realise, as she was so modest, that her father Filadelfo frequented the celebrated Jean-Léon Gérôme’s studio in Paris (1874-1878) and travelled through Spain with fellow artist, the American Julian Alden Weir (1876).

It was a joy to be there and it came bubbling out of me. I would talk and laugh with the other artists in the room, drawing at the same time. We would giggle at each other’s drawings, especially the failures. Simi would come and critique us and guide us and laugh too. She would correct our drawings, advising one about learning to see and always had a smile for us.

Many of the friendships formed in those years with artists like Joke Frima, Charles Kapsner, Daniel Graves, Andrew Lattimore, Evan Wilson, Robbie Wraith, Nicky Fleming, Nelson White, James Scrase, Charles Cecil, David William-Ellis, Nancy Peale, Paule Cooke, Frank Stazzula, and Ben Long -through marriage and divorce, and of life in general- some are great artists and some are not artists at all- but the friendships still remain today. It really was an extraordinary time and it really is like an extended family.